8 Key Literary Devices That Every Writer

Should Use in Their Work 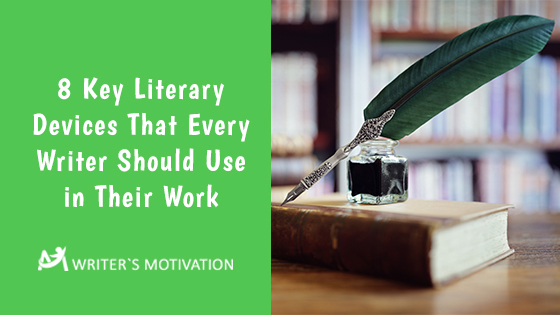 If you are thinking of becoming a professional writer, you should have the right tools to write properly. Remember that your potential readers can be quite picky, and if your work does not stand out then you will not have any impact as a writer. One of the best ways to create great work, is to use literary devices. They will not only add substance to your work, but a sense of flair as well.

Here are 8 literary devices that every writer should use in their work.

This literary device prompts the writer to give hints on future events. This technique is predominantly used to create excitement or anticipation for a specific event. When using foreshadowing in your work, you should make sure not to overdo it with the details. Just give your readers the necessary tidbits to get them interested, but not too much that you technically give away the coming events.

In Martin Scorsese’s The Godfather trilogies the orange is used to foreshadow a death or unfortunate event. One great example is a scene in the first Godfather film. It shows Don Vito Corleone inspecting oranges in the market, moments later he is gunned down by hired guns.

As the name suggest, symbolism is all about using specific objects or animals to symbolize a concept or intention. For example, dogs can be used as a symbol for loyalty, or a rat as a symbol of disease.

In both the Godfather novel and film series, the symbolism of dead fish is used. After the Corleone family’s top enforcer Luca Brasi was assassinated by a rival crime family, they are sent a large bag of fish. This symbolizes that Luca Brasi is sleeping with the fishes, or in layman’s terms he is dead and his body has been disposed of in the sea.

This technique is one of the most popular and effective literary devices in use. A metaphor entails the writer to compare two similar subjects, by implying that one of them is the other.

But it is just two lovers, holding hands and in a hurry to reach their car, their locked hands a starfish leaping through the dark.

The parents looked upon Matilda in particular as nothing more than a scab. A scab is something you have to put up with until the time comes when you can pick it off and flick it away.

Related reading: 11 Classic Metaphors That Will Inspire You to Write

A simile shares many similarities to a metaphor because it implies that there is a similarity between two objects. However, the main difference between the two is that similes don’t imply that the two objects are the same thing. Instead, it only points out that the two share similar characteristics.

An allegory is a story that can be used to symbolize an idea or a concept. The main idea of an allegory is that the subjects and characters in the story should be more than they appear, and that they represent a specific idea or concept.

The story of Icarus is a perfect allegory. Icarus is the son of the Greek inventor Daedalus. They are both imprisoned in the island of Crete. Due to his cleverness, Daedalus was able to fashion working wings out of feathers and wax. Before they escape from the island, Daedalus tells his son to stay away from the sun, because its heat will melt the wax from his wings. However Icarus is stubborn and ignores his father’s warning. This causes his wings to disassemble, and he plummets to his death. The allegory usually symbolizes the folly of over-ambition.

A hyperbole uses an exaggerated statement to highlight a statement’s specific meaning. This literary device is very popular, and is used to add color and context to a statement.

Personification is a literary device that gives objects specific human traits.  These objects are specifically non-human or are not alive.

An allusion is a literary device that calls something to attention, without actually mentioning it. The literary device is used to hint at a person, literature, art, or thing. When you use an allusion, you are already assuming that your readers share common knowledge of a certain topic, and are thus familiar with the reference.

Literary devices are writing techniques that you can use to effectively express your concepts to your audience. With this list of literary devices, you’ll be able to create truly unique and nuanced work.

If you want to learn more about writing and how to finally self-publish your work, you should check out Writers Republic. Get a free consultation and get your writing career started.