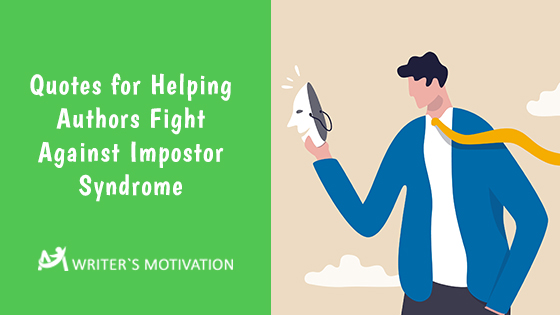 Impostor Syndrome is a common phenomenon that can dishearten even the most determined writer from pursuing their writing career to the fullest. It can affect any writer, even those who have had successful writing careers. If you are suffering from Impostor Syndrome, remember that you are not alone.

Impostor Syndrome can be a major obstacle in your writing career. Some of the more severe conditions may even have the writer think that he or she is just impersonating a successful writer, and that any fame or success is undeserved. This is a big blow to any writer. If you are such a writer, you will need to find ways to cope.

Here are some great quotes that will help you fight against the impostor syndrome as a writer.

“Some years ago, I was lucky enough invited to a gathering of great and good people: artists and scientists, writers and discoverers of things. And I felt that at any moment they would realise that I didn’t qualify to be there, among these people who had really done things.

On my second or third night there, I was standing at the back of the hall, while a musical entertainment happened, and I started talking to a very nice, polite, elderly gentleman about several things, including our shared first name. And then he pointed to the hall of people, and said words to the effect of, “I just look at all these people, and I think, what the heck am I doing here? They’ve made amazing things. I just went where I was sent.”

And I said, “Yes. But you were the first man on the moon. I think that counts for something.”

And I felt a bit better. Because if Neil Armstrong felt like an Impostor, maybe everyone did. Maybe there weren’t any grown-ups, only people who had worked hard and also got lucky and were slightly out of their depth, all of us doing the best job we could, which is all we can really hope for.”

“You may be the only person left who believes in you, but it’s enough. It takes just one star to pierce a universe of darkness. Never give up.”

“Whatever course you decide upon, there is always someone to tell you that you are wrong. There are always difficulties arising that tempt you to believe your critics are right. To map out a course of action and follow it to an end requires some of the same courage that a soldier needs. Peace has its victories, but it takes brave men and women to win them.”

“If my doctor told me I had only six minutes to live, I wouldn’t brood. I’d type a little faster.”

Succeeding as a writer may seem like a dream for most writers. Some writers have even succeeded, and still feel like frauds. They may even feel like impostors in their own success

This is called impostor’s syndrome, and if you want to continue succeeding as a writer, you will need to address this. With these quotes from famous authors, you’ll at least realize that it is just a state of mind, and does not need to be your reality as a writer.